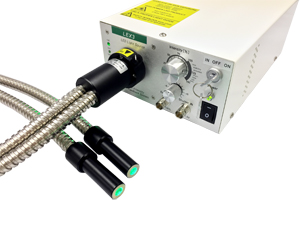 LEX3 is a new LED illumination system using a high-powered LED chip. It has been designed to offer brighter and more stable lighting than the previous LED system. There are two models available: blue (peak: 465nm) and green (peak: 530nm).

LEX3 features a high-powered LED chip and original feedback mechanism for maintaining stable light intensity. It is our best LED system in terms of brightness and stability, resulting in very good signal to noise ratios.

LEX3 can be used for many biological applications. It can be used with MiCAM high speed imaging systems as an excitation light source for detecting fluorescent signals, or as a light stimulator for cells that express light-activated proteins in electrophysiological experiments.

LEX3 consists of a high-powered LED chip, which produces a light intensity over 360mW/cm2. It is approximately 2.3 times brighter than 150W halogen light source.

The intensity can be simply adjusted with coarse/fine dials on the front panel in the range between 0 and 150% (100% to 150% intensity can be used for short-pulse illumination lasting less than 1 second). 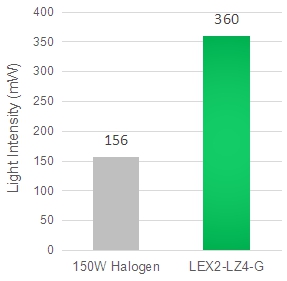 The intensity is more stable than halogen lamps and does not produce any flicker or large arc fluctuations, in comparison to Xenon and Mercury light sources. LEDs are an ideal illumination source for high speed imaging. However, light intensity of LEDs tends to decrease when turned on for long periods of time, due to the heat of LED chips. To keep light intensity constant, LEX3 adopts an original feedback technology. This feedback mechanism results in less than ±0.3% drift within 30 seconds at 50 % intensity.

The light can be turned ON/OFF by signals from external devices such as MiCAM high speed imaging systems or pulse generators. By sending a pulse greater than 1.5V through a BNC connector to the front panel of MiCAM high speed imaging systems, the light can be activated. LEX3 does not use any mechanical shutter, so there is no noise caused by vibration or sound.

Adjustment of the light intensity by external signal

Light intensity can be controlled by analog voltage signal from external device. 3.3V voltage input can set about 100% light intensity.

LED intensity adjustment control can be monitored through a BNC connector. At 100% intensity setting, outputted voltage is 3.3V.