MiCAM05-N256 is a high-speed imaging system that captures and visualizes small changes in fluorescence intensity from biological samples stained with fluorescent probes, such as voltagde sensitive dyes and calcium dyes.

MiCAM05-N256 is designed to be the upgraded version of the previous MiCAM ULTIMA model, which has been used by neuroscience and cardiac research labs internationally, and which has been cited in many scientific research journals. 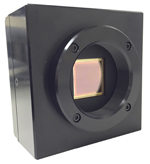 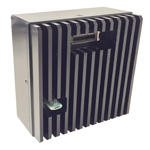 N256 camera head is equipped with a new CMOS image sensor designed and developed by Brainvision.

Applications such as membrane potential imaging require both very high speed, and the ability to detect small changes in fluorescence, such as 0.5-1%. In order to optimize S/N ratios, it is important to increase the amount of light captured by one pixel. It is easy to collect light and capture small changes using a sensor having large pixels.

The overall performance has been improved in a balanced manner. This includes maximum frame rate, spatial resolution, and S/N ratios, all of which are important factors for high-speed membrane potential imaging.

It is now possible to easily switch the full well capacity of the camera in the acquisition software. Two modes are available: wide dynamic range mode (D-mode), and high sensitivity mode (S-mode). D-mode is used for tissue samples with high fluorescence light intensity, and S-mode is used for cultured cell monolayers, or preps with low fluorescence light intensity. This adjustable well depth makes it possible to image a variety of biological samples using a single camera.

Preset partial readout setting and multiple ROI setting can be selected, and as a result it is possible to achieve higher frame rates. For example, ultra high frame rates such 20,000 fps @ 32×32 pixels is possible. 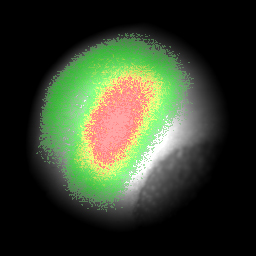 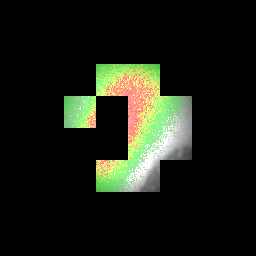 New USB3.0 interface allows for significantly faster data transfer from processor to PC. It is now possible to save data directly to HDD or SSD, and long-term recording of several minutes up to a few hours can be achieved, regardless of the RAM capacity (Note that sampling rate, number of pixels, number of cameras used, and PC specifications, will affect the total recording time).

Up to two camera interface boards can be connected to the MiCAM05 processor. Each interface board is equipped with two camera ports, therefore up to four of the same type of camera head can be connected at any time. This allows for simultaneous imaging of multiple fluorescent wavelengths, as well as three-dimensional imaging from different angles.

Continuous output of light intensity is available as a standard function

The light intensity monitor/continuous output function, available as an optional component of MiCAM Ultima (DAC/ADC expanding unit), is available as standard equipment with MiCAM05. This function is designed to output the light intensity changes of up to eight user selected pixels via eight BNC connections. Therefore, waveforms of fluorescence change can be monitored and output before, during, and after data acquisition. It is also possible to monitor the change in light intensity in real time, using optional software. 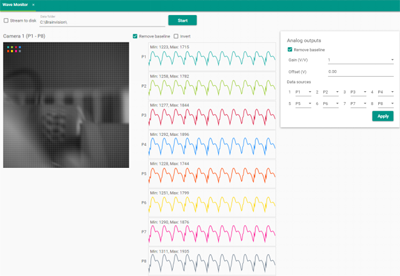 This function is to output the lighting signal synchronized with each frame timing from MiCAM05 to multiple LED light sources. This makes it possible to easily synchronize the frame acquisition with MiCAM05 and LED lighting.

There are up to 4 channels of output. Preset patterns, in which signals are output alternately from each channel, are available. There is no need to set the lighting pattern using a commercially available pulse generator.

Moreover, since the pulse delay time and pulse width can be specified by software, it is possible to make detailed settings in accordance with the rise and fall times of the LED used. 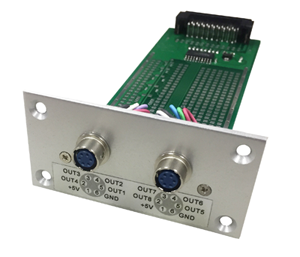 MiCAM05 has multiple input and output connections available, in comparison to previous MiCAM systems. These universally standard I/O connections can be synchronized with image acquisition and external devices. An additional slot has been added to MiCAM05 so that customization is also available, depending on the research application.

In addition to the “Shutter” output terminal for controlling the timing of illumination in synchronization with image acquisition, there is a “LightCtl” signal output terminal for automatically adjusting the intensity of the excitation light. In this way, light intensity or saturation percentage of the image captured by the camera, can be adjusted using the software. As the background light intensity becomes similar throughout an experiment and even for different biological preps, the experimental repeatability can be improved.

Turnkey System Ready for Immediate Use 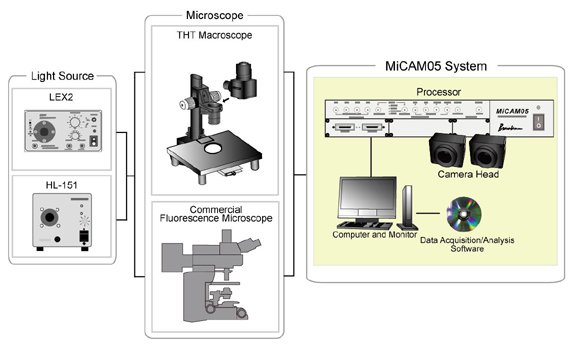 MiCAM05 can record activity which occurs before and after a trigger signal is generated. When an external trigger occurs, such as a spontaneous biological signal, or a trigger pulse from an external stimulator, a specified amount of “pre-trigger” data can be saved. The “post-trigger” data is also collected in the same recording. As a result, both pre-trigger data and post-trigger data can be saved within one acquisition period.

MiCAM05 can capture phenomenon that changes in a few minutes up to several hours, intermittently. Because illumination light is turned on only at the time of image acquisition, phototoxic effects to sample is minimized, and a stable baseline can be acquired. 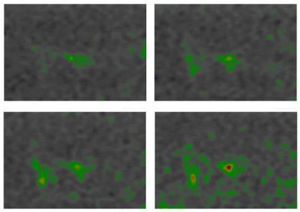 BV Workbench is the image acquisition software that controls MiCAM05-N256 imaging system. In addition to image acquisition and control of inputs and outputs of the imaging system, analysis functions including movie playback, wave display, filter functions, etc…are also included. BV Workbench has an intuitive user interface that is easily operated with the use of a mouse. 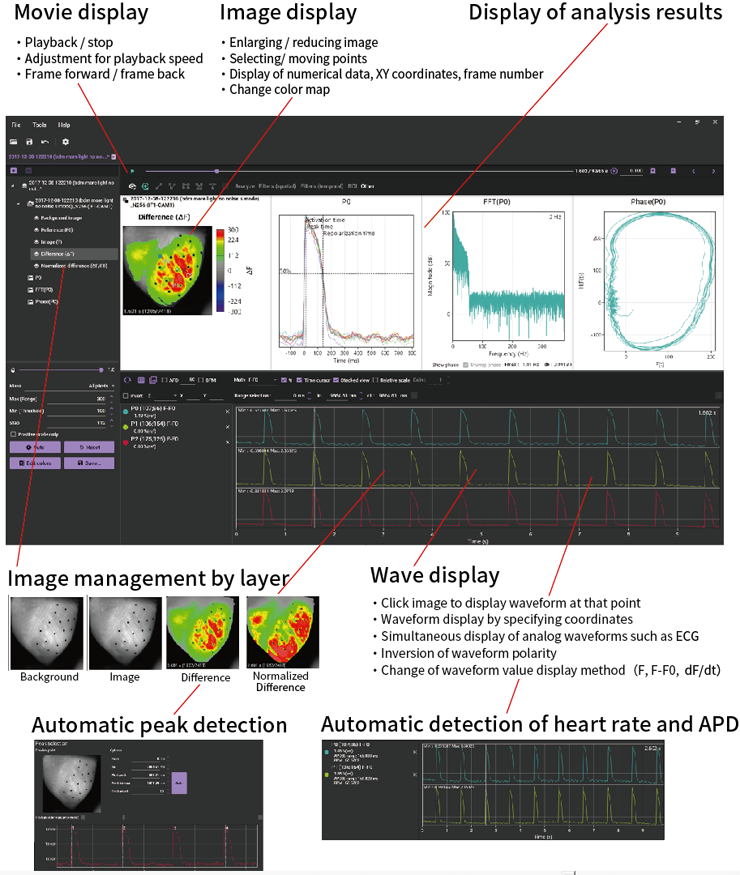